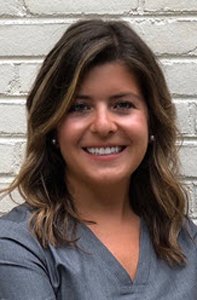 Dr. Taylor T. Arkema grew up in Salem, Virginia. She became interested in dentistry at an early age after watching both her father and grandfather in their orthodontic practice. She attended The University of South Carolina where she earned a B.S. in Exercise Science. After college she then attended the Medical University of South Carolina, College of Dental Medicine in Charleston, South Carolina where she obtained her Doctorate of Dental Medicine.

During Dr. Arkema’s time in dental school, she found herself very involved in many organizations which allowed her to spend time in the community and give back. She has volunteered at South Carolina’s Dental Access Day (DAD), several Mission of Mercy projects in Virginia, and has traveled to Peru to provide dental care through Dental Community Fellowship. She is very passionate about giving back to her community and plans to continue to be involved in mission work.

Although school was a big part of Dr. Arkema’s time in Charleston, she not only fell in love with the art of dentistry, but also fell in love with the city of Charleston, and her now husband, Matt. After graduation, she married and moved to join Matt in Richmond where he has started his career as an attorney. Dr. Arkema has a mini goldendoodle named Sully (after Sullivan’s Island, SC) which she loves exploring with. She also loves trying new restaurants, being on the water, and going on long walks/runs to explore.